Marcy Bessolo Hermanson enjoyed a walk along the south Bete Grise beach last week and shares a few photos from that 2 mile walk. She said the beach is a mile from where you park, to the channel irons, so there and back is a nice walk. I admit, I’ve never walked along this beach, which is part of the Bete Grise Preserve, but that’s something I’ll have to change.

The Mendota Lighthouse, in Marcy’s last photo, is privately owned, but adjacent to the Preserve, so walking along the beach, you’ll get a look at this historic Lighthouse, too. Check out the link at the beginning of this paragraph for more info on Mendota.

The video today is TV6’s coverage of a story about the Bete Grise Preserve acquiring wetlands in the area in 2013 and keeping it open to the public. The news reporter starts out with a bit of a stumble over the pronunciation of Bete Grise, but it’s pronounced correctly by the reporter in the field.

I remember my first time there. With no pun or humor intended I was calling it "Beatty Grease".

In French it translates to Gray Beast. Not sure I get the connection put forward by Wikipedia about smoke from blueberry bog fires. Should we believe the Wikipedia and "Pure Michigan" recitation of some other folk lore:

"The legend is that a Native American woman lost her love to Lake Superior and, because she spent the rest of her life on the beach crying and calling out to him, the white sand still calls to him to this day. You can reawaken her voice by making the sand sing with the palm of your hand, by patting or brushing the surface. However, it only works if you’re on the beach at Bete Grise. Take the sand anywhere else, and it loses its voice."

Applause to the HKCD. The Houghton Keweenaw Conservation District is doing this sort of thing in a good way. They are at the opposite end of the spectrum from some other conservation groups. These others seem to be self centered, comprised of a few or several private parties that pooled their money to buy parcels of land, only to close them off to the public, all in the name of conservation. The laws allow this but it seems their underlying motive is to receive tax breaks while keeping the land for their private use.

I wonder if very many Pastylanders ever watch this kind of video, or any TV program, for that matter with the "closed captions" turned on.
Being slightly hard of hearing, I routinely do, 'cuz I occasionally miss a word or phrase.

If y'all thought the "news reporter's pronunciation of Bete Grise was a hoot, try watching this with the "closed captions" on, and I quote:

a new parcel of land near bet grease Bay was recently acquired by the hole in kuna Conservation District to add to the existing preserve TV sixes Houghton Hancock reporter cerebral a visited the scenic coastline to see the area that is now officially protected ... (sounds of waves hitting the beach) ... the home team when a conservation district now has protection of over 180 acres of coastal land off bay degree in Lake Superior the land includes 1,500 acres of forested wetlands and over 9000 feet of pristine coastline at point isabel Houghton key when a Conservation District chairperson Gina Nicholas says though much of the accusation is inland the area at point isabel is a popular spot for people to visit it's mostly wetland the road comes very close to the lake there and it's very scenic and kind of a favorite very picking picnic you know you escape for people the four million dollar purchase came to fruition a decade after an original 1,800 acres of land became the bay degree preserve Nicholas says the land recently added to the preserve was bought from to private parties there is a little county park at the kind of the south end of the new acquisition of point isabel that i believe many people always thought was a public park corn in fact it really was on private land Nicholas says with funding from the Great Lakes restoration initiative the National Oceanic and Atmospheric Administration the Nature Conservancy and countless other organizations the land is officially protected and open for public use our goal is largely a conservation goal which is to protect these natural habitats to protect the native species we wanted to keep it open to the public because the public's been using it for over a hundred years sara blakely TV 6 News Bay degree

I can forgive the lack of punctuation and run-on text, but omigosh, what gibberish!

You have to wonder how folks who are really seriously deaf must struggle with the likes of this.

Is this the best they can do? Really?

I see much the same in most news programs, and the battery of Sunday morning "talking heads" programs.

Granted, concurrent closed captioning, perhaps more so than concurrent translations at the United Nations, takes a complex set of skills, but at least for the national news/"talking heads" programming that should include a thorough familiarity with world geography and a multitude of politicians and administrators names.

I hope that isn't a "minimum wage" job!
And i sure hope the concurrent translators at the UN do a much better job!P.S.: "… over 180 acres of coastal land … includes 1,500 acres of forested wetlands …"?

(Yes, I know, I had few typos in that, but with the image, I couldn't go back and correct 'em without deleting the entire post and doing it again.) ˂sigh!˃

I think I finally know how it's pronounced..."Bet-uh Greezz", does that sound about right? Although, Oddcast at https://ttsdemo.com/ pronounces it..."Bet Grizz"???

Was that Bait Agrees?

If you want the French pronunciation, then it should be spelled "Bęte Grise".

But for how "Bete Grise" is 'officially' pronounced in Michigan, listen to the LARAą Pronunciation Guide - 'You Say it How in Michigan?
Turn your speakers on and click here: BETE GRIS.

Kinda funny, they got the pronunciation right, but misspelled it!

For more, see (click →) Pronunciation Guide - 'You Say it How in Michigan?' for Michigan Names and Places

This pronunciation guide was initially developed by BTBL as a guide for narrators across the country during audio book production to get Michigan name and place pronunciations right. In addition, whether you’ve lived here all your life, just moved here, or happen to be visiting or planning a vacation to this great state, the below directory can help you with the correct pronunciation of Michigan’s many unique cities and places. This is a live document that is updated as new information becomes available. For suggestions, comments, or corrections, please contact the library at btbl@michigan.gov. By FRNash/PHX, AZ (Frnash) on Sunday, May 17, 2020 - 09:55 pm:

With that settled, now someone 'splain to me:

How do you pronounce Oneco, as in Oneco Rd. (Calumet, MI), 1.5 miles north of the Houghton County Airport, from US-41 east on the Boston Road alignment: 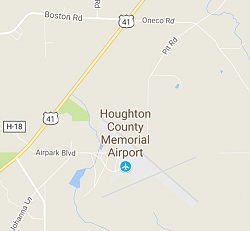 It seems now there's just "Oneco Rd", where there once was an "Oneco Location" somewhere very close by, apparently lost in time — tho' surely not in the minds of many of the locals!.

It has always sounded like "Bay Degree" to me.

I have a fond memory of camping at Bete Gris with Mom & Dad with the Coleman tent in about 1953 when I think it was C&H property. We were next to the canal across from the lighthouse and still near to the beach. I think I was about 3 1/2 years old.

I love Bete Grise. That is all!